Since there were a few questions on how we achieved the graphics for Ludum Dare game Deadline of the Dead, here’s a brief breakdown of how everything was put together in 72 hours.

The level is actually made up of very few different components. The entire map is a maze of 1m high walls, which we quickly mapped out using ProBuilder in Unity. There’s a single giant texture mapped over the entire level, and we just painted all of the floor texture and ambient shading on there. 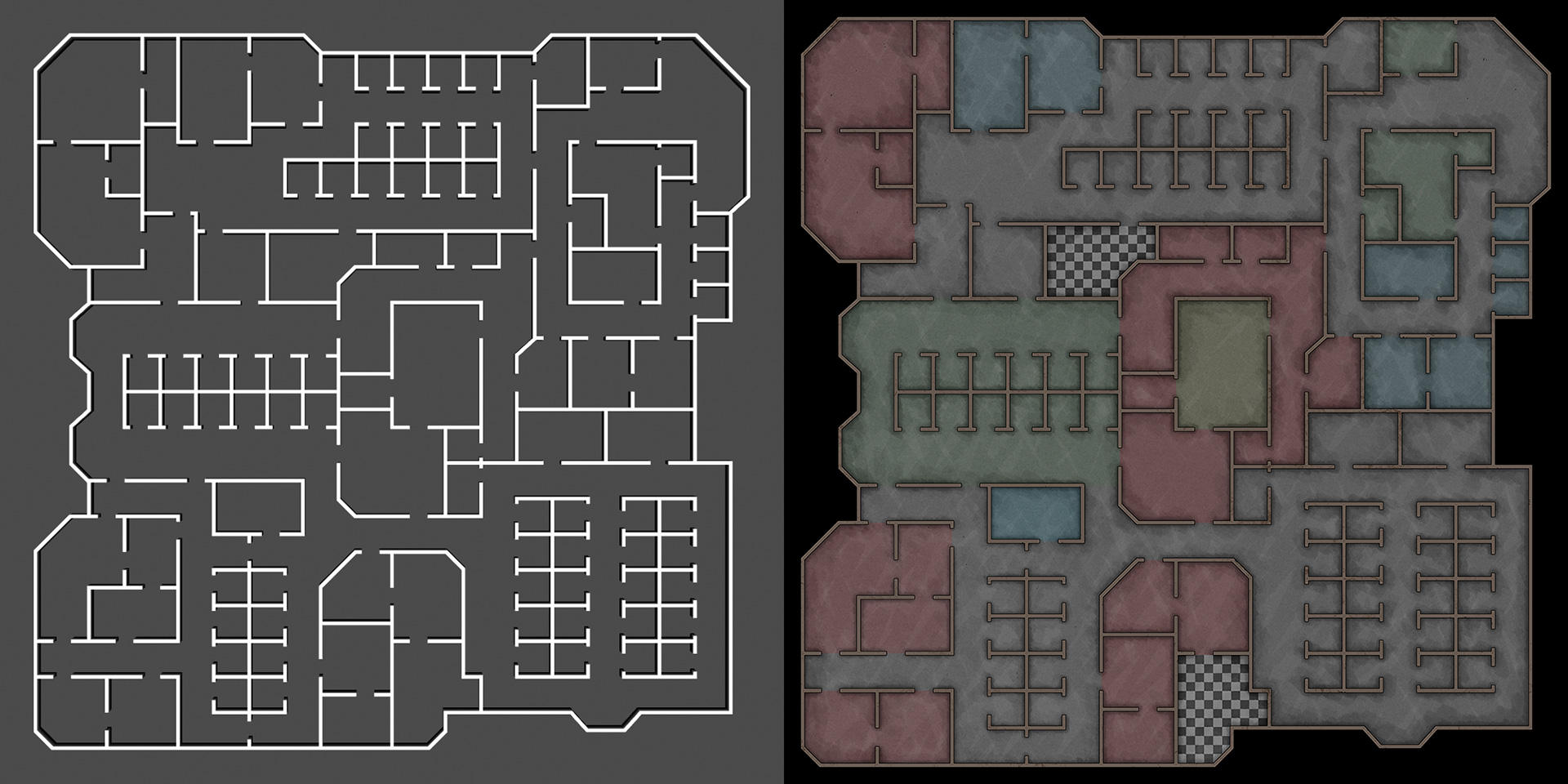 We roughly sketched out as many different pieces of furniture as we could think of, with a few variations. In the editor, all the furniture is actually just these sprites on top of black boxes of varying heights: boxes are at .3m, desks at .5m, shelves at .9m, etc. We then furnished the entire office using the above sprites – which could have been a lot of work, but luckily Unity now supportes nested prefabs! 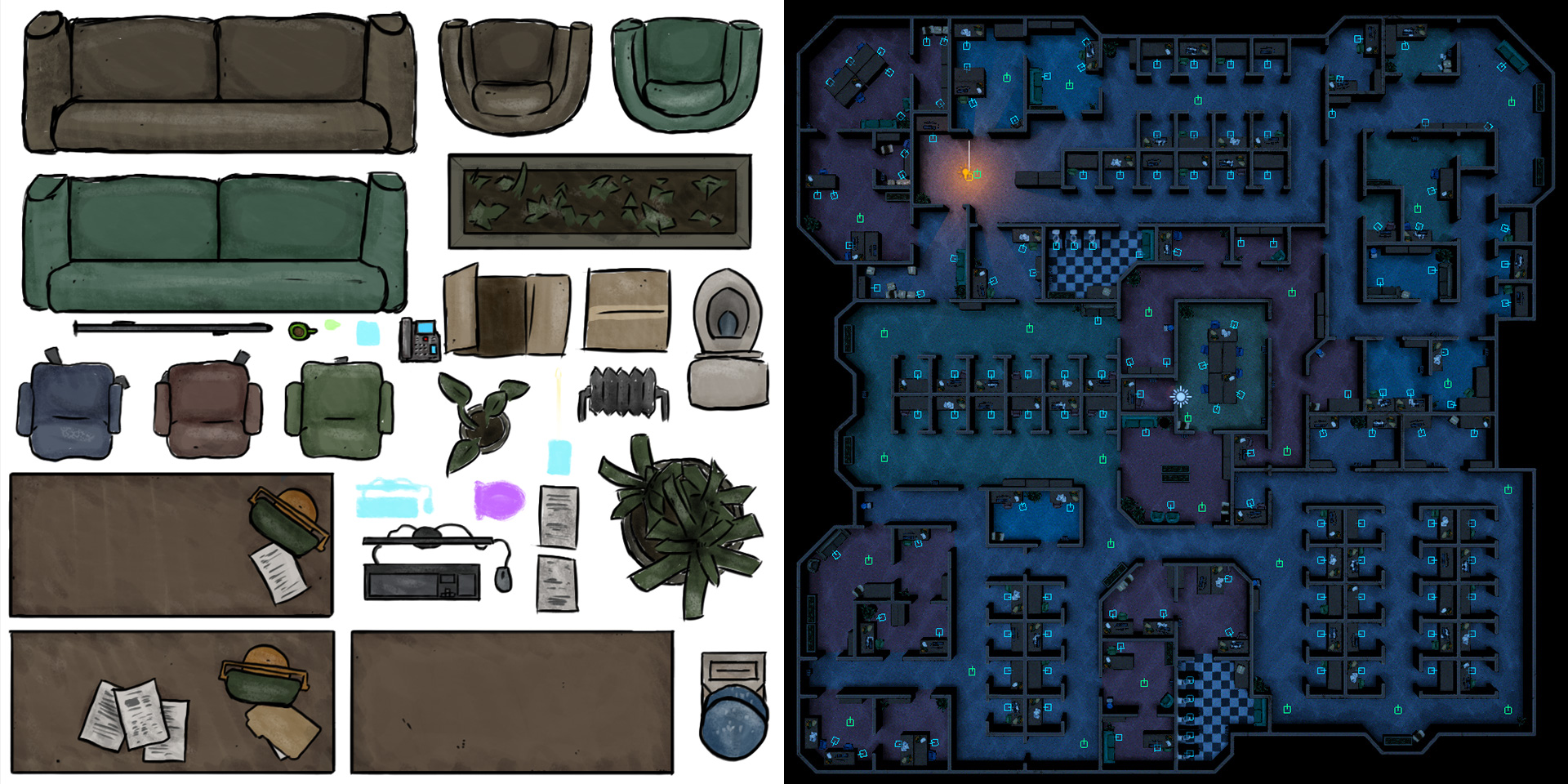 The colored boxes in the above image are AI hotspots. The zombie AI is fairly simple: Zombies spawn at the green hotspots (whenever they are not in view of the player) and will randomly pick any of the blue (work) hotspots, walk over there and stay there for a few seconds pretending to work. Whenever the player comes near them, they will follow and attack. That’s all really.

We attached a dynamic point light to the player to create a dynamic shadow/line of sight effect. Plus some simple color grading and post processing on top to make everything look good. Here’s a look at the editor view: 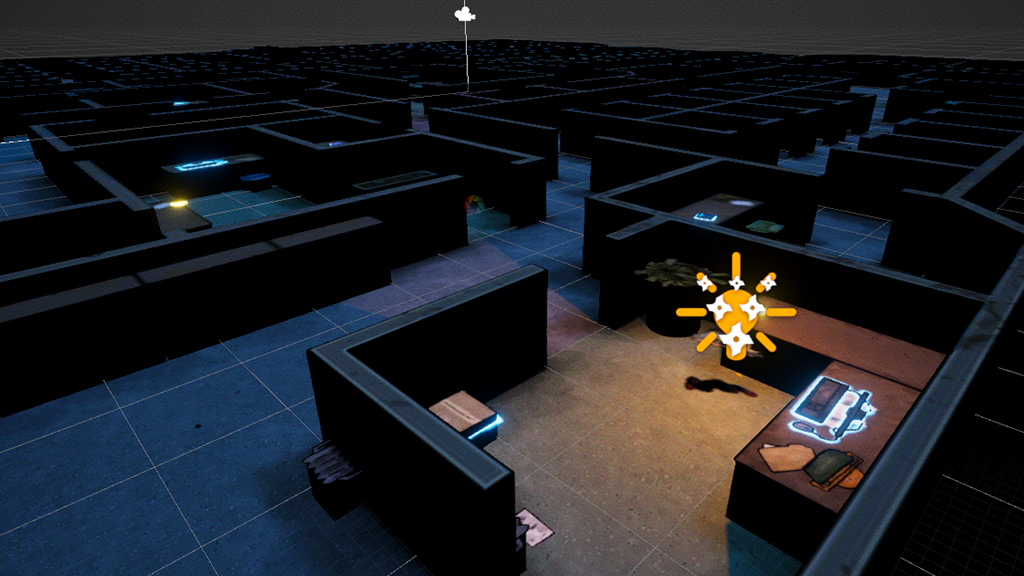 The dynamic blood stains were a last minute idea as well. Originally Zombies had a blood spray particle effect, but would not leave any stains on the floor. We put a big dynamic RenderTexture on the floor, covering the entire level. There’s also a static orthographic camera that sees the entire level, which renders only the blood particles. This camera renders its image into the rendertexture, but never clears the buffer. So the blood stains on the floor are not actually the points at which the blood hits the floor, but an accumulation of the blood particles flying through the air. It turned out to be a really cool effect that took only a few minutes to set up, and is very light on performance, no matter how bloody the level gets.

You can play the final result here.

Get Deadline of the Dead

Deadline of the Dead

Balance work and not being eaten by zombies

Outstanding work in such a short space of time!